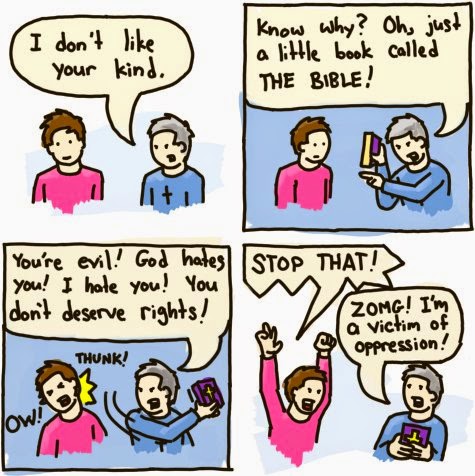 The recent decision in favor of Hobby Lobby Stores, Inc., seems to have emboldened the politico-religious crusaders.  We are seeing a number of states passing or considering "Religious Freedom" bills (including my own state, North Carolina).  These laws are little more than thinly-disguised attacks against the expansion of gay rights (or against the ACA); unfortunately, those pushing forth such laws are too cowardly to admit this in the light of day.  My contention here, though, is that these laws are actually ridiculous on their face regardless of the motivation behind them, but the reasons for this have yet to be addressed by any media outlet.

No one making such claims has ever explained exactly which religious belief is being violated, other than by a nonspecific, nebulous inference.  Never have we heard reference to even a single particular religious edict or law that is being trespassed upon, nor are we likely to.  No details are offered other than a vague appeal to what is seen as an impenetrable, untouchable, and virtually “un-discussable” shield.  This seems to be a popular reaction when the act or idea in question touches on an overtly-stated constitutional guarantee – it is beyond reproach, cannot even be talked about as if any aspect of it were in question. We know that this is not the case, though. Well-known restrictions on freedom of speech and of the press exist (think of the actions of the FISA court or the famous Holmes opinion from 1919), and there are of course exceptions granted to the prohibition against searches and seizures (“Operation Eagle” and other police checkpoints, property seizures in the war on drugs) as well as on the possession of firearms. This goes to the essence of our system of governance and to the way in which we are both privileged and obligated to assess interpretations of our laws – we can and must have a reasonable discussion (that is to say, a discussion based in reason, not one that is merely amicable) regarding the application of the system to ourselves and our lives, especially when we notice conflicts or when tension is apparent.

A crucial feature of this system is thus implied: in order to have an intelligent discussion, we must first agree on the definitions of the terms used in that discussion. Sometimes that which is under dispute is a definition itself, which merely pushes back the required agreed-upon definitions to concepts surrounding the issue. Only when this groundwork is complete can the point of contention be clearly understood, argued, and resolved, if resolution is in fact possible. This is what I see as the first major problem of those advocating the granting of such exemptions to individuals and companies claiming religious objection: their terms have never been fully defined. We all must understand and agree what is meant by terms such as religion, belief, religious objection, religious conviction, and religious rights; however, widely accepted and fixed definitions for these and similar ideas are scarce or nonexistent - they are malleable concepts whose plasticity can be, and often is, exploited. Until their definitions are hardened any other actions are fruitless. I am convinced that simply agreeing on what these terms mean will carry us most of the way towards resolution, but I also have a strong suspicion that there are those who will resist any efforts to firmly pin down these concepts, and that their resistance will increase the further down that road we progress. This is due to what I think will be the increasingly apparent flaws in their arguments. This applies in general whenever the pressures of reason are brought to bear on those defending their positions solely using religious grounds: opposition becomes ever more shrill, strident, obstinate, and unreasonable.  Such types will always cower behind a shield of obfuscation.

Sadly, the odds are well in favor of such discussions never taking place. After all, we have come this far as a nation utilizing vague or half-formed notions of these things, why should we start now? A frank treatment of these subjects in this way would most likely be very uncomfortable; should this prevent us from tackling it head-on? It is firmly in my mind that we are so obligated, if for no other reason than that these very concepts are important to the rights of so many. It is high time that we exert our collective will to force this discussion into the open. The only reasons that can be mustered in opposition to the occurrence of such an open dialog are rooted in diffidence or cowardice.

Assuming that a dispute still exists once the hard work of defining our terms is complete (which is very optimistic indeed on several counts), the next obvious step would be to understand exactly how the situation in-question impedes the plaintiffs from practicing their religion. This would involve several things: a clear citing of the exact proscription of which the plaintiffs are claiming they are forced to be in violation, a demonstration that such claim is in fact a legitimate religious proscription, an explanation of how offering the product or service conflicts with that proscription, and a citation of where, when, and how the situation prevents the plaintiffs themselves from adhering to that proscription.

I think a common misconception here, and the reason for much of the plaintiffs support, is that because providing goods or services to those in question is objectionable to the religious beliefs of some, this translates to an infringement on religious liberty, which is not the case.  If the claim is that the inability to deny selling a good or service to a select group, which is otherwise available for purchase by anyone, is the same as being forced to perform or endorse the act objected to, then we are left wondering why it has taken them so long to complain.  Taxes collected from business profits are used for all sorts of tasks and items that run counter to religious sensibilities:  aid to countries with Sharia as law, extraordinary renditions, weapons of mass destruction, etc.  It seems a bit late in the game to be claiming religious grounds for decrying any particular action as impeding religious thought or action – one is tempted to suspect that it might just be a combination of politics and convenient timing rather than a noble stance on principle.

Of course, the necessary forms of analysis involve plenty of effort for all involved. The good news is that if we take this approach we would be well served in having laid the groundwork for resolution of many similar disputes. The risk, mostly for the plaintiffs seeking a waiver for their discrimination, I suspect, is that their claims, and many others like them, will be revealed as nonsensical and frivolous.

If any of their claims makes it to the final point of such an analysis, and I don't for a minute believe they should, then the allowance in the first amendment against prohibiting the free exercise of religion would apply – but, here the important point is to remember that it applies equally to all of us. Your right to practice, or in this case, enforce, your religion ends when it affects my ability to practice according to my own reason and conscience, and vice versa.  Now, if anyone can show that the religion of the plaintiffs in question commands them to discriminate against others, I would be much surprised (and alarmed), and so should you.  In such a case the religious edict would be legally questionable.  If an entity is offering a product or service for sale to the general public, in no case would ensuring that such an entity cannot discriminate against selling to a particular subset of that public be the same as forcing that same entity to perform the acts to which the it has an objection.  This would be the only way that a prohibition on refusal of services could be construed as being in conflict with one's religious proscriptions.

That such discussions never take place leads me to think that society sees the claim of religious offense as akin to pleading the fifth amendment on the witness stand - no further explanation may be demanded or is to even be expected on offer.  However, the analogy may be more appropriate than it appears, for frank and open discussion on this topic can only serve to weaken their position.  Taking the 5th is the strongest hand they can play.

I would ask you all to please play a vigorous part in bringing these aspects to the forefront of our media's attention, or at the very least to your neighbor's. If we fail to address the root of these issues now, we will have to fight these same otherwise useless battles again and again.
Posted by V at 7:48 PM No comments:

V
I live out "in the sticks" of rural, central NC, and I work in telecommunications engineering about 40 miles from home. This long commute gives me time to think about things, some of which I write on my Blog, "Stix And Stones" (stix-andstones.blogspot.com).